Well, I said I was going to try and build one. I finished it last week, and have fired it up a couple of times, and I'm pretty pleased with it. For those who haven't met one yet - it's a wood stove where the fire burns along a tunnel, then up an insulated chimney inside a barrel. The exhaust then runs through a metal flue covered with cob, which warms up and slowly gives off heat. More here if you're interested: http://en.wikipedia.org/wiki/Rocket_stove

I decided to build the whole thing underground in my 20x10 foot polytunnel. I used to use electric heaters to keep it frost free, but that's way too expensive

First I mocked the whole thing up on the drive:

It's built out of bog standard engineering bricks, the wood goes in the hole at the front, the fire burns inside the middle bit, and burns up the chimney (a stainless pipe). It worked well on the drive, so I dug a huge hole in the polytunnel, and rebuilt the whole thing 2 foot underground, sticking the bricks together with a clay:sand mix. A barrel goes over the chimney - I used a recycled copper water tank. The fifteen foot long horizontal chimney (6" diameter) was built from clay drainage pipe, and is about a foot under the main poly tunnel bed. Here's some pics of the finished thing:

The only bits visible above ground are a 4" hole to stick the wood in, and the copper barrel. The fire is about 18" underground, and burns very strongly, but sideways!

The clay pipe is buried a foot under the middle of polytunnel. This pic's taken from the other end - a couple of CIDPs keeping warm in the middle

A big mistake the first time I fired it up was not to water the bed first - the dry soil acted as a good insulator, so nothing really got warm... Watering it a lot helps spread the heat from the hot clay pipe to the soil.

The exhaust pops up just outside the polytunnel, with an old aluminium flower pot to put over it when I'm not using to keep rain and wildlife out. The exhaust is only just warm to the touch even when it's burning away at full tilt - all the heat goes from the clay pipe into the soil.

I'm using waste wood from my workshop to fire it at the moment, then will move onto the big stack of sticks from cutting the hedges. It burns very hot - difficult to get a good picture, but strange watching the flames burn sideways! I put a big brick over the hole to adjust the draft, and to close it off when I'm done.

A short fire of about an hour kept the polytunnel frost free during the week when it was -2C outside. I don't know how warm the soil gets (certainly doesn't feel hot), but the barrel is too hot to touch within a few minutes. I'm happy with it, and the best news - it's now free to heat the polytunnel!
Top

It will now be interesting to see how it performs over the winter and just how much work it needs to keep it running! I guess it will be a bit of trial and error to get it right and a steep learning curve even though I guess you have done your homework thoroughly!

On the flip side, I hope we have a mild winter and that you won't need to use it too much!

I thought you were going to post a picture of you, with a sooty, blackened face and reporting that it didn't work!

Cheers - yes, I've still got lots to learn on how to run it... The biggest trick seems to be managing the draft - it burns slow if I close the hole up with a brick to about an inch, and if I open the hole up too much it burns like crazy, and flames out the front hole too... About half closed seems to be working for me today, but still getting the hang of it. Only needed to go up twice today in a ~1h burn - adjusting the draft changes the speed of the burn, so I can load it up and do something else for a bit.

If the fire is burning underground - how do you get to the ashes to empty it?
Top

Is this a similar way to how the romans used to heat their underfloor heating in their villas, just on a smaller scale?

Also, I take it that this is what Flounder is aiming to build for "a fiver"?
Top

Absolutely brilliant, well done Carl, I will definately be considering this idea for my polytunnel, so dont be surprised if you get a pm from me soon

Springy wrote:Is this a similar way to how the romans used to heat their underfloor heating in their villas, just on a smaller scale?

Also, I take it that this is what Flounder is aiming to build for "a fiver"?

Much smaller than a Roman Hypercaust but the principle is somewhat similar.

Hypercausts needed to be tended like furnaces and created lots of waste from using huge amounts of wood but these are meant to use much less and actually burn up everything leaving no ash behind, even the smoke burns in an effective rocket heater.
Top

Very impressive Carl. Ill admit I dont have a clue how it works but if it works 5 stars to you

big round of applause for that man,just a suggestion,would backfilling around the pipe with chippings give you a better thermal mass ensuring heat was delivered for longer periods?
im thinking when the real cold sets in ,if it does,things will cool down a lot faster
mars ROVER broken down. headgasket faillure
Top

I echo what the others have said, a brilliant set up

The amount of branches I take to the recycling centre during summer/autumn would probably last me all winter If I can find somewhere to store it.

I think I would have the fire pit outside to avoid losing valuable space inside, and consider using some sort of fins on the clay pipe to distribute the heat more evenly. Too late for this year, but definately something for a project for next summer/autumn.

A bit worried about having to water the soil unless you have a waterproof membrane to stop it evaporating out into unwanted humidity.
Best regards
Dave

Troppoz wrote:Very impressive Carl. Ill admit I dont have a clue how it works but if it works 5 stars to you

Thanks for the kind comments everyone. I expect you could build the thing for free, as you can reuse and recyle stuff. My copper barrel was waste, the bricks were surplus from another project. The problem with building the thing outside is that steel and iron will rust quickly - that's why I used stainless and copper. If you're good at scavenging, you could make this very cheaply.

It took me a while to figure out how the thing works - this picture (not mine) might make things clearer: 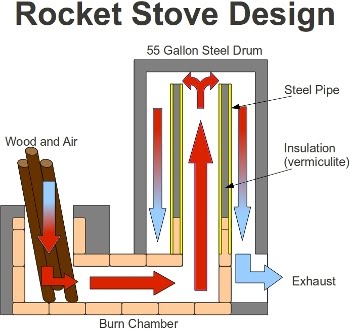 There's some more info on this page too, and a video, if that helps anyone: http://leighblackall.blogspot.com/2010/ ... -mass.html

The idea of backfilling around the pipe with chippings would be a good idea, but I want to grow veg in the bed over the summer, so didn't want to lose more of the growing space. I thought about putting the fire outside, but the bricks around the fire (and the barrel) get very hot and store loads of heat, and I wanted that to go into the polytunnel too. Hopefully I can plant right up against it in the summer. I always end up with high humidity in the polytunnel because it's built on soil, and I grow veg in it over winter in the beds, so they're always watered anyhow. I'd just forgotten to water it recently, due to building the heater! Dry soil is a really good insulator ...

It produces almost no ash - you just empty the ash out by putting your hand down the feed hole and grabbing it. Bit messy, but simple. I built a little ash pit at the bottom of the feed hole, and I get about a mug full of ash from two builders bucket loads of wood. The ash pit needs emptying every two/three fires so far.
Top

, can't wait to see your results next spring.
Top

Well done Carl you solved the space thing well by sinking it, can't wait to get mine up and running, which I will shortly....soon....I sure!
Top
Post Reply
45 posts